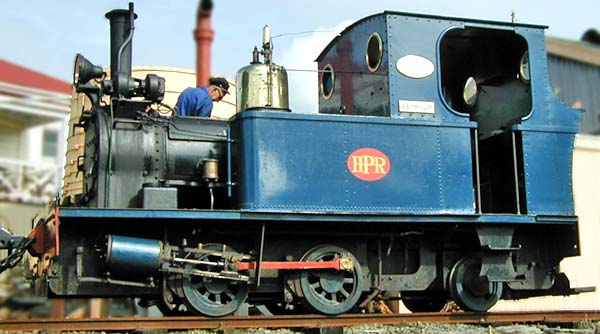 The pride of the fleet is Seymour, a Thomas Peckett & Sons Ltd. 0-4-2T shunter, gifted to the club by Wilson’s (NZ) Portland Cement Ltd. in 1977, when the cement works discontinued its extensive industrial railway. In regular operation until May 2002, this locomotive is believed to be the last new steam locomotive imported into New Zealand. Built in 1955 at Atlas Locomotive Works, Bristol, England, for Wilson’s Cement, it joined two identical Pecketts, an 0-6-2T Peckett, two Bagnall 0-6-0 diesels, and one 0-6-0 Drewry Car Co. shunter in reportedly New Zealand’s largest privately owned railway. Seymour is currently undergoing a complete restoration, including a new welded boiler, and hopefully will be returned to service in 2006.

Several years ago the club decided to use firewood as fuel instead of coal as wood is more environmentally friendly and is a renewable resource. Also, wood contains natural tannins and creosote which acts a metal preservative, as opposed to coal, which contains small amounts of sulfur, an atmospheric pollutant and precurser to sulfuric acid, which is highly corrosive to the locomotive’s metal parts.